Ice floes around the Bering Sea

Akhlut are shapeshifting spirits from Yupik folklore. They appear as either orcas or as wolves, and live among ice floes around the Bering Strait. They are often depicted as a hybrid between an orca and a wolf.

In the original folklore, akhlut were gigantic orcas who could shapeshift into equally massive wolves to hunt on land.[1] In traditional art they are usually depicted in mid transformation, with the features of both wolves and whales.[2]

Most modern interpretations portray them as creatures that are perpetually half wolf, half orca rather than shapeshifters. They are generally amphibious.

An occasional variant of the creature appears as a beluga whale, and can transform into a reindeer to traverse on land. It is unclear whether this variation is carnivorous or not.[2]

Akhlut are known for their ferocity, and they hunt humans and animals alike. When hungry, they become wolves and run across the land searching for prey. Once they have eaten their fill, they return to the water and assume their orca forms once more.[3] Wolf tracks leading to or from the ocean are an indicator that the animal may be nearby.[1][2]

Nelson (The Eskimo About Bering Strait) claims that the creature is called Kăk-whăn'-û-ghăt Kǐg-û-lu'-nǐk, and in orca form it is known as akh'-lut, and in wolf form as kǐg-û-lu’-nǐk.[2] These may be mistranslations or alternate dialects, as the central Yupik romanizations for "orca" and "wolf" are "arrlug" and "kegg'luner" respectively[4]. It's unclear what the word "Kăk-whăn'-û-ghăt" might mean. At any rate, it appears the name these creatures are most well known by is simply a corruption of the Yupik word for "orca". 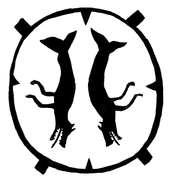 Add a photo to this gallery

Retrieved from "https://offbeat.fandom.com/wiki/Akhlut?oldid=5299"
Community content is available under CC-BY-SA unless otherwise noted.